Leanne Ely is a New York Times bestselling author and the creator of the original menu planning website, SavingDinner.com, now online for over 20 years.

A nutritionist since 1993, Leanne cares deeply for her audience. Through her own personal journey, she has taken herself out of the kitchen and into her audience’s daily lives to encourage them to live their most vibrant lives, heart, mind, body, and soul.

Her media experience includes multi-city book tours, satellite media tours, QVC multiple times as well as guesting on several national television shows, including HGTV’s Simple Solutions, ABC Family’s Living the Life, Ivanhoe’s Smart Woman, Small Talk for Parents, and Talk of the Town. She has guest chef-ed on the cooking show, Carolina Cooks and has taught cooking classes all over the country for Bloomingdale’s. 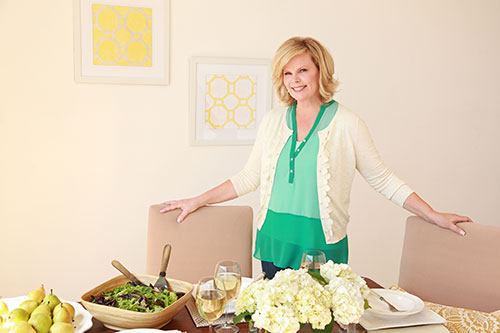 She has been media trained and worked with major brands such as Vanity Fair Napkins, Starbucks, Jello, Jennie O Turkey, Del Monte Foods and many, many more.

In addition, she is a seasoned radio personality. Leanne’s own radio show, Heart of A Woman aired during drive time in two major California markets, Los Angeles and San Diego.

Her current show, The Daily Dish airs daily (except Sundays) on the Saving Dinner Facebook page. Leanne’s syndicated newspaper column, The Dinner Diva goes out to over 250 newspapers nationwide and in Canada.

She has been featured in Woman’s Day, Parents, Redbook, Women’s World, Self, and Shape magazines to name a few. Leanne has also been featured in the Chicago Tribune, New York Times, Boston Globe, St. Petersburg Times, Orange County Register—and dozens of other major newspapers.

Additionally, she is a Champion (spokesperson) for Meals on Wheels, a sought-after speaker and has spoken all over the country, including the National Press Club, with keynote addresses to corporate and nonprofit entities alike.