Summer is here! Obviously, I’m a big fan of the grill and I feel as though I’ve spoken at length about it in that regard, so this isn’t another article expressing my unwavering love for this cooking marvel, rather, it’s a cautionary tale. 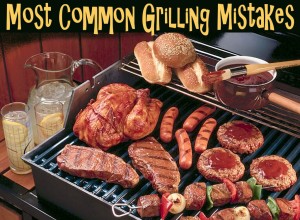 Though the grill may seem flawless and requiring hardly any maintenance at all, it isn’t always the case. The grill is a remarkably low-maintenance piece of equipment, but it does need some looking after. So, I’m going to make a little list of common mistakes you can learn to avoid from the start:

Clean Your Grill. Just because everything technically burns off, doesn’t mean you shouldn’t scrape down the remains of the previous meal made. Think about it, would you want burnt scraps of last week’s dinner sneaking into this week’s? I didn’t think so. All you need to do is take a metal brush and either brush it down after you use it or even wait until you use it again – either way make sure it happens before the next course of food touches the grate.

Put A Lid On It! (or not) Just because you have a lid doesn’t mean you have to use it religiously. In fact, I suggest skipping the lid when grilling the essentials (steak, chicken, burgers, etc.). You’ll notice that whenever you do that you lock in the smoke and your steak that had been marinating for two days prior will have the strong taste of smoke instead of the marinade.

Make It Right. First of all – don’t just throw a steak on the grill straight from it’s packaging. That flavorful first bite you’ve been looking forward to since you brought that luscious steak home in the first place is going to be severely lacking in any flavor. On the other hand I don’t want you to submerge it in a sea of marinade for a week. Think simple. As far as steaks go, I recommend rubbing each side in with salt, pepper, garlic powder, and a bit of basic steak rub – taking a gallon size Ziploc and add just a bit of olive oil and apple cider vinegar, then add the steaks and allow them you soak in that for a few hours if not one or two days. Then write me a thank you note telling me how delightful your steak was!

Keep Your Eyes Peeled. When you’re grilling, you won’t have the same amount of prep time you do when you’re in the kitchen. In fact, you really won’t have any time at all because you’ll always have to keep an eye on whatever you’re grilling lest it becomes charred remains. So, before diving into the dinner you’ve plotted to be entirely cooked on the grill, make sure everything is seasoned, sliced, diced, and ready to go!

We have ways of making grilling SUPER simple, check out our Freezer Meals that go on the GRILL