I am about to say something that many you of may be shocked by. Some of you may even utter an audible gasp. You ready? Some packaged foods aren’t all bad. There, I said it! Believe me, the standard will always be food in its most natural form, but not everything in a package is evil. Let’s take a look at some of the reasons and examples. 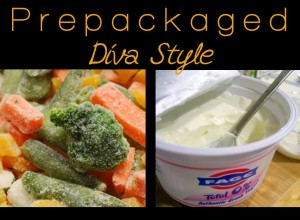 The obvious first reason to like packaged food is the time factor. I don’t have the time to always whip up a grand meal to feed my family because I do have other responsibilities outside the four walls of my kitchen (believe it or not). So how do you know which foods are allowed in packaged form?

The type of packaged food I buy most often is frozen produce. I love making smoothies every morning, and buying enough fresh fruit to use in the two smoothies I’ll make for myself and my husband during weekdays can get pricey: that’s ten servings of smoothie. Frozen fruit is a lot cheaper, picked at its peak and is massively convenient.

The quintessential frozen veggie is green beans. It’s a favorite in my house and no one seems to get enough of ‘em, nor do they even notice they’re frozen! I’ve used frozen broccoli and cauliflower is soups before and again, no one seemed to have noticed. Or at least they didn’t say anything (they would have if you knew my bunch, LOL)

To get great frozen produce, make sure that all that’s in the bag is that veggie or fruit. Organic produce is also priced way less when it’s frozen and bought in bulk.

Another packaged food in my house is yogurt. I’m all about the Greek yogurt (double protein) and adore the creamy texture. It’s quite tart, but adding frozen berries and just a drizzle of honey and cinnamon makes a fabulous dessert-like treat!

So there you have it! See? Even Dinner Divas buy packaged foods!

Love smoothies? Me too, check out our Summer Smoothies, and Summer Salads Menus then come see me make one!

PrevPreviousBest Vitamins and Supplements for Women
NextTip, Trick & a Recipe: Ode to OkraNext