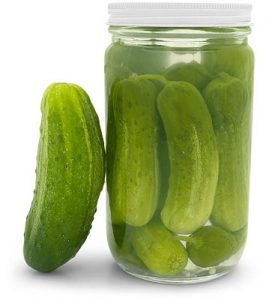 Way back in the days before refrigeration, the number one way to preserve food was with the pickling process. All pickling is, is putting your food (usually veggies, but sometimes eggs or meat) in salt or vinegar, or both for a long time. These tandem ingredients stop the growth of bad bacteria that make food spoil.

If you’ve been lucky enough to end up with a bounty of cucumbers from either your own garden, a friend’s or picked them up at the farmer’s market, making your own pickles is a tasty way to get your cucs dealt with before you burn out on too many cucumber salads. Making pickles is fun and easy. To get started, you’ll need some simple canning supplies, some recipes, and of course, cucumbers!

Here’s a list of supplies (a few of which you probably already have) to make pickle making a breeze:  candy thermometer, a stone crock, a weight, jars, lids, bands, canning salt, white or cider vinegar, boiling water canner. You should be able to buy most of these items at your local super center, and sometimes you can even find these items used at thrift stores. Ask your grandma or some neighbors for some of this stuff; you might be surprised at who has canning jars in their attic!

I like the Ball Blue Book of Canning; pick up a current copy to make sure you’re canning safely and away you go.

Here are some great recipes for pickles, enjoy!

In a large bowl or container place sliced onion and cucumbers, sprinkle with canning salt, cover with ice. Refrigerate for three hours. In a large pot, bring to boil, the sugar, mustard seed, celery, turmeric vinegar, peppercorns, and ginger. Sugar should be dissolved and boiling, then drain the pickles and onions well, add to boiling mixture. Immediately fill pint and quart jars with cucumbers, onion and juice mixture. Leave 1/2 inch head space for expansion. (follow instructions with your canner) Process for 30 minutes keeping the temperature at 180 degrees Fahrenheit.

Process jars in canner according to canner instructions. In a sauce pan combine vinegar, water, salt, and sugar; bring to a boil. Place 1 teaspoon dill seeds and 1 clove of garlic into each jar, then pack in cucumbers. Pour boiling mixture over cucumbers leaving 1/2 inch head space for expansion. Process 30 minutes keeping the temperature at 180 degrees Fahrenheit.

Tips: Always put on labels and dates so that you know when you made them. Avoid allowing to freeze but do store in a cool, dry, dark place.

Remember to follow your canner instructions, as well as recipes to the T — jars should be in the rack and covered by 1 or 2 inches of water. Bring the water to a full rolling boil, boil for as long as your directions state at the exact temperatures stated. Timing starts after water is boiling.

Always check your seals, they should be lowered in the middle and not move when you press lightly. Once completely cooled remove bands and wash and dry them thoroughly. Some people leave them on, but make extra sure you always check the seal before opening. One reason to leave bands off is so that if something went wrong the lid will pop off and not be artificially held in place by the band.