Spouting off on Brussels sprouts! 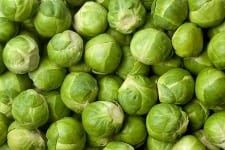 In my humble opinion, Brussels sprouts have a pretty bad rap. This is probably because many of us were forced to sit down to a plate of mushy green balls of leaves and told to eat them even though they tasted like watered down grass clippings and smelled like dirty socks. 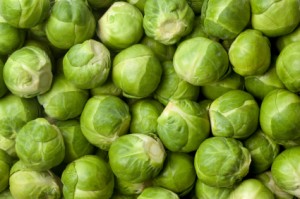 There are much more interesting things to do with Brussels sprouts than boiling them within an inch of their little cruciferous lives so don’t make old-fashioned cooking methods any reason for you to not belly up to a bowl full of yummy Brussels sprouty goodness.

Why should you care about these tiny little cabbages?

Well let’s look at the reasons:

•Cancer prevention. We all know we should eat our cruciferous veggies, right? Well Brussels sprouts top the list of these guys and they help to lower our risk of breast, bladder, ovarian, colon, lung and prostate cancers. They’re full of glucosinolate – they actually have more than kale, broccoli, cauliflower, turnip greens, mustard greens and even cabbage. These guys (glucosinolates) are the chemical starting points for many cancer-protective substances. If I can’t convince you to eat Brussels sprouts today (which is too bad because they have a very special combination of cancer-preventing compounds) then I shall weep uncontrollably. 😉 Not really, but do get in as many of those other cruciferous veggies as you can because they are SO important in our diets! Eat them every day if you can, at least three times a week if forcing them down is a chore. Eat at least one and a half to two cups of them at a time for best results!

•Vitamins and Nutrients. Fiber-filled Brussels sprouts help to keep you regular (three cheers for keeping it real in the bathroom!), and they also have lots of vitamin K, vitamin C and folate. They’re little nutritional powerhouses!

It’s no secret, however, that Brussels sprouts can be a little bitter tasting and that will translate to an out and out gag worthy response when you bring them to the table, especially from the kids!

So let’s talk about how to cook them.

First of all, as with most vegetables, undercooking is much better than overdoing it.

Overcooking Brussels sprouts causes that sulphur smell (and you KNOW what that smells like!) and it makes them taste pretty nasty, too. Let’s put an end to stinky, soggy Brussels sprouts, America!

Cut your Brussels sprouts into halves (or quarters for the big ones), let them hang out on the counter for a little while which helps to bring out some of their cancer preventing super powers, and then steam them for about five minutes – no longer!

You can also roast them in the oven which is a pretty foolproof way to cook them and absolutely delicious, too.

So whaddaya say? Pretty please, can you give your old friend the Brussels sprouts another chance?