Once this summer heat starts kicking, we all like to give our stove and oven a little bit of a break. If you’re anything like me, you find yourself depending more on the grill, salads, and a timeless favorite: sandwiches. But, like anything else at the grocery store, there are a plethora of deli meats and cheeses to choose from. So what do you buy? 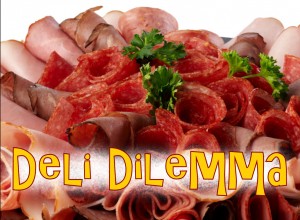 Honestly, the best deli meat you could possibly buy is from the whole cuts, not the weird stuff like head cheese, bologna and other stuff made from a multiple of meats. You want the whole cut meats that are simply seasoned, cooked, and sliced. They’re simple and they don’t have all the additives most other deli cuts have hidden in them.

The processed stuff (like the aforementioned head cheese, bologna, etc. typically have added nitrates within them, same with even some unprocessed meats. You always have to check the nutritional facts and ingredients to ensure that it’s nitrate-free. Nitrates have a bad habit of joining with amines in the stomach and form N-nitroso compounds. These are cancer causing compounds that lead to cancers of the oral cavity, stomach, brain, esophagus, and the bladder. It’s scary to think that cancer could form from just eating a simple sandwich! Some brands are better than others; always ask the deli person behind the counter if they are additive free and safe.

I would even go so far as to suggest trying to make your own deli meat! If you have a London broil or another thick-cut steak, marinate it for a day or two, cook it, refrigerate it, and then find a good knife to cut it thinly. You can even pull two meals out of that! Enjoy the steak hot right after cooking with some veggies for dinner, refrigerate overnight and use the leftovers for sandwiches. You’re not wasting anything, and you’re getting two different and delicious meals.

As far as cheese is concerned, it’s less tricky than the meats are concerned. The only cheese you really shouldn’t consume is American. It’s a processed cheese and less natural than regular cheddar or Swiss. A couple of my favorite cheeses are provolone or havarti. They both add a nice light, but rich flavor to any sandwich.

Want some new ideas for salads, sandwiches and smoothies? Check out what we offer here.