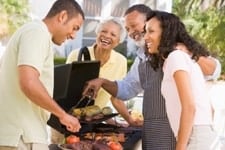 It’s barbeque season! And while we all love the thrill of the grill, it’s a known fact that cooking meat over charcoal can be harmful for our health because of the carcinogens that come from cooking over chemically charged lava rocks and from eating charred meat. 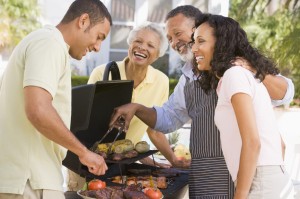 Rather than giving up the grill on those hot summer nights, here are a few ways to make your next barbeque a little healthier.

Do not burn your meat. Try to get used to eating meat that’s more on the medium side of well done! Cook your food just until it reaches the goal temperature:

Why is it bad to cook meat longer than it needs to be cooked? Because burnt meat can contain carcinogens. Remove burnt parts of meat before eating it. A little char is unavoidable and it also tastes pretty good, but don’t eat incinerated meat.

Clean the grill. Scrub that grill until it’s good and clean before using it. It’s easiest to do this when the grill is hot. The carcinogenic black coating will slough right off with your grill brush. It will be healthier for you and it will also make your food taste much much better.

Watch out for cross contamination. Don’t baste meat with marinating liquid while it’s on the grill without first boiling the liquid to kill any harmful bacteria. Also be mindful of using tongs for handling raw chicken. Don’t use them to flip over burgers. That’s asking for trouble. Another important step to prevent cross contamination is to use a clean plate for carrying cooked meats to the table.

Cook lean cuts. Reduce flare ups which create carcinogenic smoke. That means you shouldn’t grill fatty pieces of meat like ribs or sausages (oh the humanity!) without boiling them first. The fat dripping on the coals is what causes those flare ups. Grill skinless chicken breasts, lean beef, veggies, and other lean items. Always keep a squirt bottle of water beside the barbeque so you can douse any flare ups that come along.

I can almost smell the barbeque now!

Do you have any other tips for healthier grilling? Let us know on our Facebook page!