Looking to add some heat to the dinner menu?

So, you want to start spicing things up, but you don’t know where to start. Chances are, you walk through the pepper aisle examining all of the pretty little peppers and wondering what in the world you would do with them if you were to bring them home with you.

There are a hundred or so varieties of chili peppers out there, and they range in flavor and heat from sweet and mild to “are-you-nuts” fiery. Some chilies are used in their fresh form (jalapeño), while others are most often dried or powdered (cayenne).

The heat of peppers is rated on something called the Scoville scale. If you’ve ever eaten a jalapeño, you know that it has a bit of a bite to it. Jalapeños rate about 2500 on the Scoville scale and, to give you an idea of how much hotter chili peppers can get, a habanero pepper rates about 100,000–350,000 on the scale.

Some chili peppers are so extremely hot that they rate 2,000,000 on the Scoville scale. At that level of intensity, it’s no longer about taste—it’s about seeing how much pain you can stand in your mouth before you die! That might be a little extreme, but I’m more about eating for flavor and not so much about eating food hot enough to make me sweat.

Where does the heat come from?

Many people think the heat from peppers comes from their meat, but the heat in peppers comes mostly from the compound called capsaicin in their seeds, veins, and the pepper parts near the veins. If you want a less fiery dish, remove and discard the chili pepper seeds and membranes before chopping them. For more heat, include the inner bits.

How to use chili peppers

Once upon a time, the only place you’d see chili peppers used would be in Mexican dishes, but that’s not the case anymore. Roasted chili peppers are delicious in salads. Fabulous in soups, on nachos, and in pasta dishes, chilies offer a sweet heat to a variety of meals.

As you experiment with chili peppers, start on the lower end of the Scoville scale and make your way up until you reach the edge of your tolerance level.

Here is one of my favorite new recipes featuring a chili pepper–Jalapeño Salmon and Brussels Sprouts: 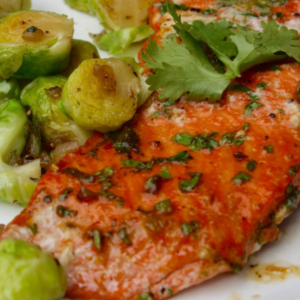