Stick it to cancer – eat cucumbers! 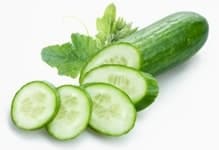 I don’t know about you, but when things start to warm up in the spring, the first food I think of when I want to cool down, is the cucumber.

Cucumbers belong to the same botanical family as squashes (zucchini, pumpkin, summer squash and winter squash) and melons (cantaloupe and watermelon) but they don’t taste much like anything from either family.

The best way to describe the taste of a cucumber is that it’s just like eating a crisp glass of water! There’s really no taste to speak of. It just tastes fresh. 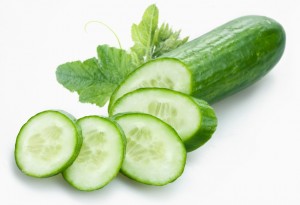 I love cucumbers sliced into a salad or chopped up and served alongside spicy curry dishes. They also frequently make it into my daily glass of fresh juice.

So they’re cool, crisp and refreshing on a warm spring day but what do cucumbers have going for them in the health department?

While cukes don’t get much time in the spotlight as far as healthy foods go, they do deserve it since they have several links to cancer prevention. Cucumbers contain many special health promoting substances known as lignans which reduce the risk of several cancer types (breast, prostate, uterine and ovarian) and they also reduce the risk of cardiovascular disease.

Cucumbers several triterpene phytonutrients called cucurbitacins which may have the ability to block signaling pathways required for cancer cell development and survival. Put up your dukes, cancer cells! Here come the cukes!

Cucumbers also have anti-inflammatory properties and they contain vitamins C, K and B5. Eating cucumbers will give you some hard-to-get silica (a mineral known for nail health) along with magnesium and manganese.

As always, look for organic when you’re shopping for cucumbers. If you can’t get organic, peel off the skin before enjoying them.