I’m always touting the benefits of coconut oil (I’m never caught without a big tub of the stuff), but it’s been a while since I’ve shared a Tip, Trick, & a Recipe using this wonderful and healthful oil that comes from dried coconut kernels known as copra.

Coconut oil is wonderful for cooking, yes, but its uses far exceed the kitchen. I keep a tub of it in the bathroom too and rub it into my dry elbows and it’s even great for removing eye makeup.

But, let’s go back and touch on some of the many health benefits of this oil for a moment.

Coconut oil has been shown to help our bodies resist bacteria and viruses that can make us sick. This stuff can fight off fungus and yeast, too. You don’t want those nasties running rampant in your body, trust me!

Your hormones are positively affected by coconut, too. Those who regularly take coconut oil tend to have good blood sugar levels, increased metabolism, and more energy and endurance.

Coconut oil can even help your body to make better use of fat-soluble vitamins (vitamins A, D, E, and K).

And if those benefits weren’t enough, a study published in a 2009 edition of the scientific journal Lipids showed that women who ate two tablespoons of coconut oil each day for 12 weeks showed lowered amounts of abdominal fat.

I use coconut oil nearly every time I saute. It’s so good for us! Oh, by the way, coconut oil has a high smoke point so it’s great to cook with. If you haven’t used coconut oil before, you might be surprised to know it is solid at room temperature but melts easily when heated.

Now, it’s time for your Trick:

If you’re feeling a bit low on energy, try eating a tablespoon of coconut oil!

Looking to shake things up with your smoothie? Try blending a tablespoon of coconut oil into your smoothie for better-staying power; you’ll keep fuller longer. 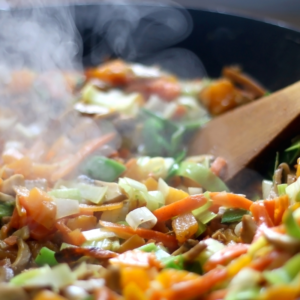