Dinner Diva: Add a new meat to your dinner plate. Game on!

There’s a lot more in the way of meat out there than pork, beef, and poultry. Venison, bison, rabbit, goat, and even alligator are all examples of readily available game meats (in most places).

With the paleo way of eating running rampant in the country these days, and with one of the pillars of that lifestyle being the consumption of wild meats, game is easier to come by in stores now than it has been in some time.

Whether you’re a primal eater or not, game meat deserves a starring role on your dinner plate on a regular basis. Wild game meat is, in general, a healthier option than commercially farmed meats for several reasons. Here are a few of them:

Leaner. Wild animals feed on grass and their natural diets, rather than being stuffed with fatty grains. Wild animals are also more active, out there roaming free on the range, which results in very lean meat. Domestic animals have 25-30% body fat compared to the average body fat percentage of wild animals being under 5%.

More protein. Because game meat is less fatty, there’s more protein per ounce, making it a richer source of protein than meat from its domestically raised counterparts. Goat is higher in protein than beef, and yak meat has twice as much protein as chicken breast. Did you know that alligator is a very easily digestible protein?

Iron, zinc, B12. Game meat is higher in B12, zinc and iron than domestic meat is. One of the reasons for this is that wild animals usually live longer than their farm-raised animals, giving them more time to develop high iron levels.

Low Omega-6. Omega-6 fatty acids lead to inflammation in the body, which can cause lots of problems from diabetes and obesity, to arthritis and cancer. Game meat isn’t fed corn and grain like domestic animals are, resulting in meat with less omega-6 fatty acid.

High Omega-3. Those good Omega-3s are found in abundance in wild game. Remember, we need Omega-3s for our bodies to function properly, and they also help to lower inflammation in our systems.
In addition to all of these benefits, game animals are raised in their natural environment and not exposed to hormones and antibiotics like domestic animals are.

If you’re nervous about adding game meats to your diet, try to introduce it slowly, by adding it to meats you’re familiar with.

Always cook game meat at a lower temperature than you would fattier pork and beef.
—————————————
PS–Speaking of meat, enjoy this recipe for Chicken and Mushrooms with Roasted Red Pepper Sauce: 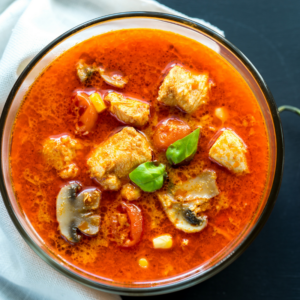 SERVING SUGGESTION: A big salad of arugula, sliced red onion, cucumber and avocado, tossed with Leanne’s Basic
Vinaigrette.
Tried this recipe?Let us know how it was!