5 Ways to Turn Your Child into a Veggie Lover!

It’s easy to get kids to eat fruit. Fruit is sweet and it comes in pretty colors. Getting kids to eat vegetables, though? Well that’s a whole other story.

If your children are good little veggie eaters, there’s a good chance you’ve exposed them to veggies from a young age so that they recognize them as part of the regular routine. If they balk at veggies the first, second and even the third time, do not give up! Research tells us that it can take six or seven times of trying to get your child to eat a vegetable before they finally will.

You will eventually wear them down so do not give in! 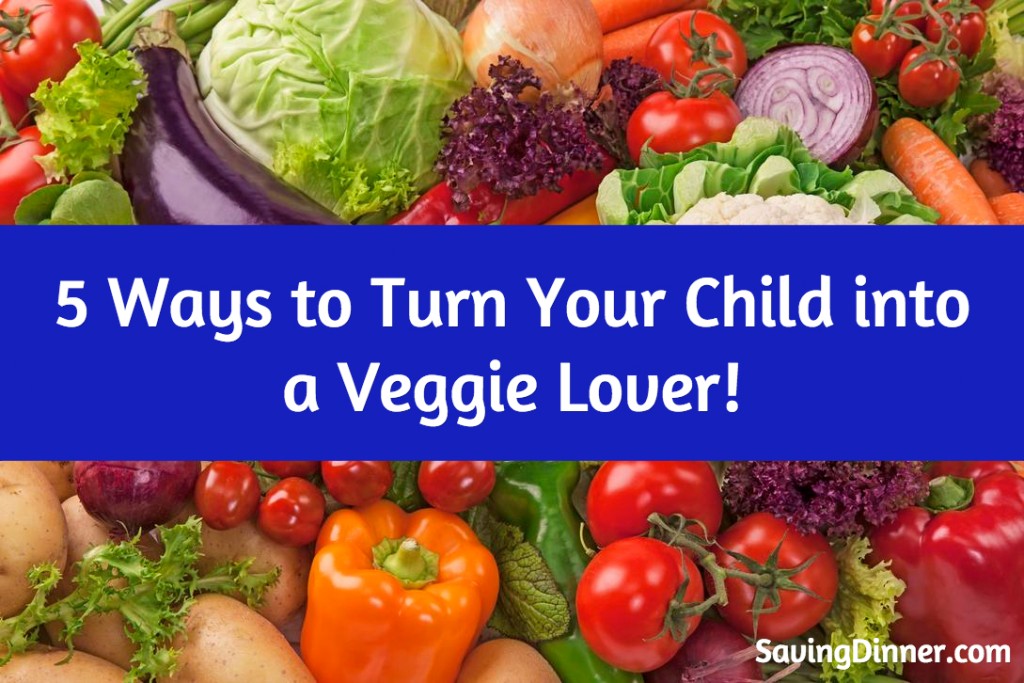 Don’t be a tyrant, but keep the upper hand. You are the parent and YOU control what goes on your child’s plate. Not your child.

I don’t believe in hiding veggies in order to get them into our kids but it is a good secondary strategy. We should be teaching our children about the importance of vegetables from the time they’re old enough to listen to us, but while you’re training their palate to eat more of them, you do still have to keep them coming.

Puree vegetables into spaghetti sauce and soups. Put pumpkin puree in your beef stew. Grate beets into black bean and beef burritos. Keep veggies “omnipresent” with every meal whether they’re seen or not and that’s going to be a great strategy to get the kids to a place where they will finally eat them on their own without begging, coercion or bribery.

It also helps if they see you eat and enjoy your vegetables. You can’t very well sit and choke down a plate of broccoli and expect your kids to then wolf theirs down!

If you’re a little late trying to get your kids on the veggie bandwagon, you may have a tough road ahead, but don’t give up! Food is medicine, I firmly believe that.

Let’s look at a few more creative ways you can get more vegetables into your kids.

1. Make it fun. Serve snacks like ants on a log. Spread peanut butter or sunflower butter on a piece of washed, organic celery, and place raisins (ants) walking down the log. Place an assortment of sliced veggies in different shapes on a plate and encourage your children to make art out of their food. Who can make a funny face out of their veggies? Extra points for eating your own creation!

3. Involve them. When you make a salad, instead of bringing it to the table in a big bowl, present your children with veggies in separate bowls and let the kids choose which they want.

4. Introduce new vegetables in foods they already love. If your kids love soup, make a big pot and add a new vegetable in there. If your kids go ape for pasta, add some broccoli to your next batch. If meatloaf is something everyone in your house loves, grate some veggies into it. Put pumpkin in your pancake batter. Yes, this sounds like hiding veggies, but there’s nothing wrong with adding nutrients to dishes your kids already love. Just be sure and tell them while they’re gobbling it up what’s in there. That will make it more likely they’ll try those veggies in other forms as well!

5. Let them drink it. You know how I feel about juicing! Toss some kale, carrots and any other veggies you have on hand into the juicer. For sweetness, add an apple. Toss in some fresh ginger for an added nutritional boost. Serve with a straw in a pretty glass and voila!  Or, instead of juicing you could give them a glass of our Just Juiced Veggies mixed in water (you could also sprinkle Just Juiced Veggies over food).  If you haven’t tried Just Juiced Greens, now is a great time as we have waived our shipping cost for a limited time!  If you have tried them before, now is a great time to stock up!  Click here to get yours now

All of these strategies worked for my two kids (now young adults in their 20s) and they’ll eat any veggie that’s put in front of them!

PrevPrevious5 Foods That Will Cool You Down
NextGinger Pork TenderloinNext