Rheumatoid arthritis, multiple sclerosis, lupus, thyroid disease, celiac disease, psoriasis and inflammatory bowel disease are all examples of autoimmune diseases, and millions of North Americans are affected by them. If you don’t have one of these diseases yourself, I’ll bet you know someone who does.

Autoimmune disease is one of the top ten leading causes of death among women in the US. This country spends over one hundred billion dollars each year treating autoimmune diseases.

So, it’s pretty serious stuff and something we all should try to gain a better understanding of.

There are three main types of proteins that come into play in autoimmunity:

The immune system exists so that your body can defend itself against foreign proteins. Each cell carries protein markers, and our body has the ability to tell a safe cell from an invading cell by identifying its protein marker. These protein markers are called antigens. When an antigen is identified as a foreign invader by one of the body’s millions of fighter cells, the body attacks.

But, this system is not perfect because sometimes the immune system gets confused by antigen markers and recognizes one of its own cells as a foreign invader like a bacteria or virus. Your body begins fighting itself. This attack on naturally occurring tissue is known as autoimmunity.

Proteins in various foods and infections can look similar to each other, and they can also resemble our own body parts (self proteins). In autoimmunity, your cells are confused and think they are attacking proteins of infectious viruses and bacteria or allergens in foods. However, the body is actually attacking its own tissues. It’s as if the tissues and proteins have been mislabeled.

This mislabeling is known as molecular mimicry.

Take celiac disease, for example. In celiacs, the body is confused by a part of the gliadin molecule that’s found in grains because it closely resembles the infectious virus, adenovirus 12, and part of a gut protein. So, whenever a food containing gliadin protein is eaten, the body recognizes the protein as an invader (infectious adenovirus) and the body launches an inflammatory response, attacking the gut.

Interestingly enough, these seemingly unrelated autoimmune diseases (MS, Rheumatoid Arthritis, Lupus, etc.) share a common cause. Damage to the lining of the gut allows undigested food particles to make their way into the body. This process leads to cell confusion, which initiates an immune system attack which leads to inflammation which leads to autoimmune response.

This reaction could explain why people suddenly develop allergies to foods that were once safe to eat, or why people all of a sudden become sick when they eat something that never before caused a problem.

The importance of food in autoimmune disease

Because inflammation is a key cause of autoimmune disease, it is essential to eat a diet that will reduce inflammation in the body and help heal the gut against future damage.

Dr. Terry Wahls was able to cure herself of progressive MS by following a Paleo diet. (You really should watch her Ted Talk video because it will change the way you look at food!)

Our 30 Day Challenge is happening now and in my opinion it is the most gentle (and easiest) way to embark on this new lifestyle. We provide you with meal ideas, recipes, support and more. Find out the details here: http://30daypaleochallenge.com/ 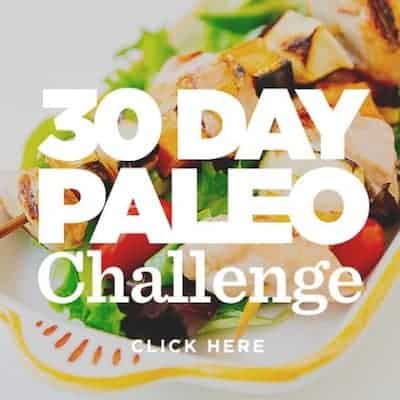