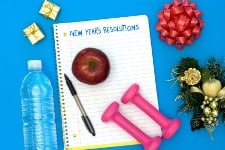 Every year, we make New Year’s resolutions with the hopes that THIS year will be different. We are zealots on a mission to become thinner, more organized and more financially successful, among other things.

Here’s the kicker: when you’re FLYing, it’s a BabyStep Revolution, daily. All or nothing attitudes paint us into a corner. There is either great success (and believe me, it’s the RARE person who is able to pull that off) or there is more commonly, dismal defeat, guilt and a self-beating that follows.

FlyLady always says to jump in where you are—how can you not agree with that? That’s actually a LOCATION if you really think about it. How can you jump in, in any other way? “Where you are” is your only choice!

Why does it have to be January first or even a Monday before we are willing to start fresh? Fresh starts are something we’re capable of every day. And we don’t need a New Year to do it, either!

So where does food fit into all of this? Well, isn’t it obvious? What do you think the number one New Year’s resolution is? That’s right—lose weight. How many have you said, “And this year, I mean it!” Only to end up at the end of the year actually GAINING?

Why do you think that is? Those weight loss gimmicks you see on TV make their living off our perfectionism: that all or nothing attitude. The “Lose 50 pounds in just 6 weeks” scenarios have our names on them and we line up willingly with credit cards in hand to make 3 easy payments of just $19.95 each. Like lemmings, we’re willing to jump off of any weight loss cliff to get to our goal. Even if it means messing up the family budget to do it! The BabyStep approach isn’t enough for us. Even though we have seen what BabySteps can do to a house full of clutter, we don’t see the corresponding principle for our body clutter.

This has GOT to stop. Stop this insane behavior before you get sucked into another infomercial and plunk down another hunk of cash for a bunch of stuff that promises you the impossible. Let me rephrase that—what they promise you IS possible for some people; however, you need to radically change your entire life to accommodate their programs. Read the fine print, too. On the bottom of the screen when they are giving their testimonials on their dramatic weight losses, it ALWAYS says, “Results not typical.”

Let me tell you something: when it comes to weight loss: what is typical are the people they would never bring on screen in a million years. The ones who didn’t make it and didn’t get “Results not typical” in fine print under their before and after shots. These are the women whose “failure” financed the hype of this infomercial!

If you have never succeeded in losing your body clutter, you are not alone. I am going to bet that the reason is that all or nothing attitude. Losing it one BabyStep at a time, isn’t even on your radar screen.

Here’s the deal: we need a revolution, not another stupid resolution. Let’s start where we are: do you have some body clutter to lose? So do I! How can we do it? BabySteps: A little less food on the plate, a little more movement (exercise in whatever form) and a little more water to drink. That simple. Let’s begin by THINKING about what we are consuming instead of rationalizing it. Remember it ALL counts—whether you eat in the car, standing up over the sink or with the refrigerator door open.

Remember, that Awareness and Knowledge make for Wisdom. 2020, here we come!!!