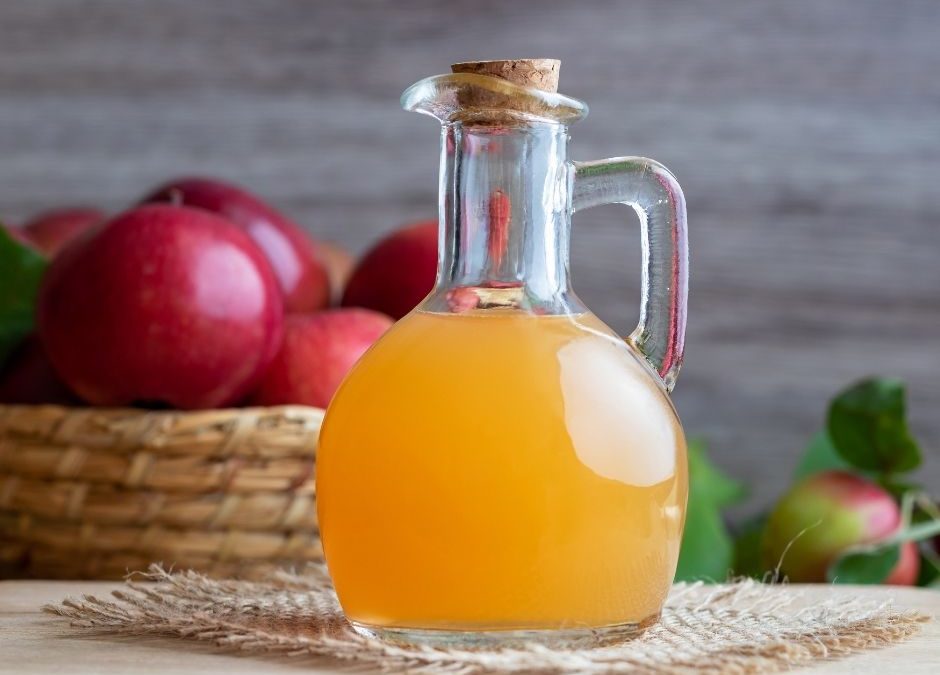 There are several types of vinegar and one of the most common and popular is made from apples.

Apple cider vinegar (ACV) is made from a process that includes adding yeast to apple cider to ferment it.  The yeast ferments the sugars in the apple juice and turns them into alcohol.  Bacteria are then added to the alcohol to turn it into acetic acid, which is the main active compound in vinegar and gives it a strong sour flavor and smell.

Cider vinegars are about 5-6% acetic acid, which researchers believe is responsible for the health benefits it provides.

Many commercially produced vinegars are filtered and pasteurized for a longer shelf life, but the processing removes the naturally occurring enzymes.  As a result, the health benefits of the product are also removed and the body also does not tolerate it as well.  In order to receive the maximum benefits of vinegar, the best product is unpasteurized, unfiltered, and organic.

Unfiltered ACV also contains a substance called mother, which consists of strands of proteins, enzymes, and friendly bacteria that give the product a cloudy appearance.  Some people believe that the mother is responsible for most of its health benefits, although there are currently no studies to support this.

While apple cider vinegar does not contain many vitamins or minerals, it offers a small amount of potassium.  Good quality brands also contain some amino acids and antioxidants.

Antimicrobial:  One of the benefits derived from ACV is the ability to kill harmful bacteria and other pathogens like viruses and other microorganisms that cause disease.  That is why people have traditionally used vinegar for cleaning and disinfecting, and treating lice, warts, nail fungus, and ear infections.  Hippocrates, the father of modern medicine, used vinegar to clean wounds more than 2,000 years ago.

Vinegar is also a food preservative, and studies show that it inhibits bacteria like E. coli from growing in and spoiling food.  For example, we wrap various cheeses in a paper towel soaked in white vinegar and it doesn’t get moldy.  Also, while there is no strong research to support this, anecdotal reports suggest that diluted apple cider vinegar could help with acne when applied to the skin.

Blood Sugar Stabilizer:  One of the most intriguing applications of vinegar is in the treatment of type 2 diabetes, which is caused by the inability to produce insulin, resulting in high blood sugar levels.  Since vinegar can help to keep blood sugar in a normal range it is also beneficial for those without diabetes because a high level of blood sugar is a major cause of several chronic diseases and aging.  Another way to keep your blood sugars in a healthy range is to avoid processed carbs and sugar.

If you’re currently taking blood-sugar-lowering medications, check with your healthcare provider before increasing your intake of any type of vinegar.

Promote Weight Loss:  Among the many potential health benefits of ACV is the potential to lose weight.  Several human studies show that vinegar can increase feelings of fullness. This can lead you to eat fewer calories and lose weight.

In one study, taking vinegar along with a high carb meal led to increased feelings of fullness, causing participants to eat 200–275 fewer calories throughout the rest of the day.

Another study in 175 people with obesity showed that daily apple cider vinegar consumption led to reduced belly fat and weight loss, though the study was done over 3 months, so these results are fairly modest and long term weight loss is more impacted by overall diet and lifestyle.

Improved Digestion and Protein Absorption:  ACV stimulates the production of stomach acid, which is necessary for digestion and aids in the absorption of animal proteins.  It can also reduce the potential for heartburn, which can be caused by too little stomach acid in the digestive process, resulting in the food fermenting and creating gas that pushes back up into the esophagus.  Since ACV increases stomach acid, it can stop the fermentation that causes heartburn.

Liquid or capsule?  Because most people are not comfortable drinking ACV straight, even in small doses or diluted in water, we’ve got a supplement for that–check out our organic ACV!